I’ve been to two Mormon Stories events: a workshop in Los Angeles and a retreat in St. George. (Workshops take place over a Friday night and Saturday; retreats include Saturday night and Sunday as well.) Both events I attended were life-changing. For this post, I’m going to focus on three messages I heard at the workshop that had a lasting impact on me.

On our way to meet John Dehlin

I knew John Dehlin would be the sole teacher at the Los Angeles event. I readily admit I was freaking out at the thought of meeting the John Dehlin of Mormon Stories podcast. It’s not that John seemed scary; it’s just that I was scared. Maybe of everything related to my new life.

It had been less than three months since my husband and I had stopped attending church. At this point, neither of us were sure who we were. It was like being in-between two worlds. We could still remember believing, but we didn’t believe anymore. Everything about that time was surreal.

Part of my brain was telling me it was wrong (disloyal) to attend a workshop for transitioning Mormons. The question, “Am I really doing this?” kept reeling through my head. But something in my core knew there was no going back. I knew too much.

We arrived a good 10 minutes early and John showed up at roughly the same time. He immediately got to work putting chairs in a circle and willingly initiated introductions. Before we knew it, we were sharing our most personal stories with people we had barely met. By the end of the evening, we felt strangely comfortable. 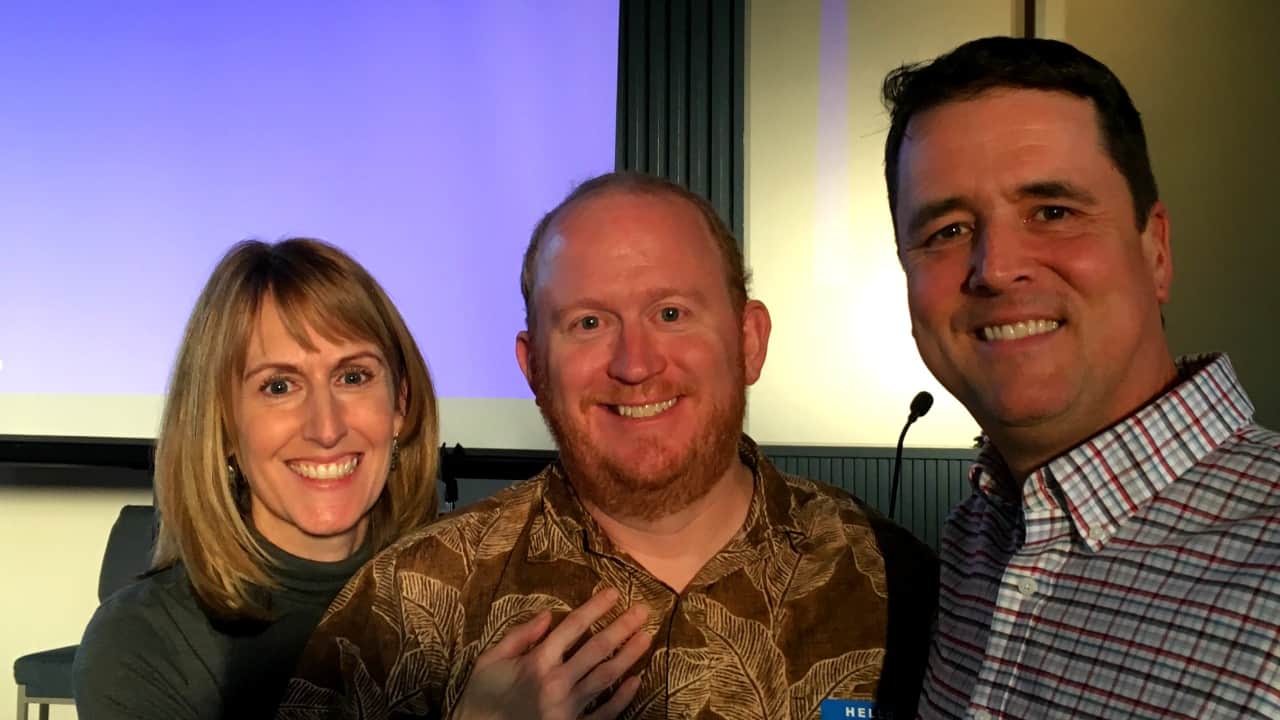 The next day, John gave us a ton of useful information. Here are three messages that had a great impact on me:

Message #1: Who knows what is good and what is bad?

During the workshop, John Dehlin shared a Chinese (Taoist) story that went something like this:

When an old farmer’s best stallion runs away, the farmer’s neighbor comes to commiserate with him over this terrible loss. But the farmer merely replies, “Who knows what is good and what is bad?”

A few days later the horse returns with three wild mares. The farmer’s neighbor comes to rejoice with the farmer’s good fortune. But the farmer merely replies, “Who knows what is good and what is bad?”

The next day, while the farmer’s son is trying to break in one of the mares, the horse throws him off. The boy breaks his leg and can’t work on the farm. The neighbor comes to express sorrow for this misfortune.  But the farmer merely replies, “Who knows what is good and what is bad?”

The next week the army passes through town, drafting able-bodied young men to war. Since the farmer’s son can’t walk, the army doesn’t take him. At this point, the neighbor begins to think, “Maybe the old farmer is wise. Who knows what is good and what is bad?”

While it’s human nature to see events as either good or bad, these black-and-white judgments don’t serve us well. Good things can emerge from what we once considered bad and vice-versa. Life is continually unfolding.

It’s always our interpretation of a circumstance that creates our experience of it being “good” or “bad.” As our beliefs shift and our relationships change, we have the option to see events as good or bad or neither.

There was a time I thought it was bad timing to leave the church when one of our children still had 22 months left on his mission. I worried my decision might have a bad impact on our relationship.

When I realized that situations we interpret as bad have the potential to be good, I began asking myself, “How could this be good?  Is there any way this could be perfect for our relationship? How could this be an opportunity for both of us to learn and to love?”

As I considered these questions, my brain gave me answers. The shift that took place in my thoughts dissolved my fear; I was more open to trust myself and my son.

My son and I discovered we could have a lot of interesting email discussions without talking about the church. I asked him questions about his personal growth and he asked me about my life coach training.

He was particularly interested in better recognizing understanding emotions. We talked about love, forgiveness, commitment to personal values, and how to “have your own back”. We have gotten to know each other on a far deeper level than we ever did by discussing “the gospel” and missionary work.

At the end of March, I received a letter from him that included these words:

I am grateful for all the advice you send me. It means a lot! I am so glad you have found increased peace in life…I look forward to a lifetime of good advice from you.

I also look forward to continuing to learn from my son. I trust him to make the decisions that are best for him. Whether he stays in the church or leaves, I support him.

Who knows what is good and what is bad? Not me. Letting go of needing to know has been a beautiful thing.

Message #2: Some people need the church

During the initial stages of my faith transition, I wanted to be understood by the community I had long relied on, but usually I just felt pain and confusion.

In some cases, people seemed more worried about protecting their own testimony than acknowledging I was hurting. I saw their reaction as a lack of compassion for me. Not only did I feel betrayed by the church, I felt people I loved were seeing me as a threat at a time I still deeply wanted human connection.

At the workshop, John mentioned that some people (psychologically) needed the church. The church provided them with community, identity, purpose and a way to understand death. The church structured their time, moral values, priorities, decision-making, and relationships.

Some people subconsciously see leaving the church as a sure path to loneliness, emptiness, and despair. For these people, leaving is not an option so there is no purpose in considering that the church might not be true. In their mind, it must be true because they wouldn’t know how to survive without the church.

Until I was 19 years old, I had no religion in my life whatsoever and when the faith transition began, I already knew I would survive. It didn’t cross my mind that some people’s sense of identity might be so linked to the church they are utterly terrified to question it.

[You may also be interested in How to Tell Your LDS Friends and Family You No Longer Believe.]

I realized I had been so focused on what I perceived as their lack of compassion for me that I had lost my compassion for them. It wasn’t that they didn’t want to understand; they simply couldn’t. Their brain’s protective instincts were kicking in.

I decided it wasn’t my job to determine who might have a psychological dependency on the church. It was my job to focus on who I want to be.

In addition, I’ve decided it’s my responsibility to seek out people who can relate to my journey. While some of my friends don’t want to hear details about my post-Mormon journey, there are many others who will listen and who can understand.

Most importantly, though, I’ve learned how to rely on and trust myself. I’ve learned how to process painful emotions and heal. Even if others aren’t able to meet me with compassion, I can do that for myself. This allows me to be brave enough to be vulnerable for the whole world to see.

Message #3: Meditation is a power tool

John taught us that meditation has a ton of benefits. It reduces pain, boosts the immune system, lowers stress, and increases energy.  It also teaches us how to observe our thoughts, noticing them as sentences in our mind rather than reality.

I used to think that the goal of meditation was to stop thinking. Now, I realize it’s about training my brain to return to present awareness. When we meditate, we learn to notice thoughts without judgment and we separate ourselves from the drama of the stories that tend to occupy our mental energy.

When John walked us through a simple meditation, I was pleasantly surprised. I decided meditation was worth practicing.

How I applied message #3:

A couple of months after the workshop, I joined a (somewhat monthly) local meditation group that I found on meetup.com.  In this setting, I not only learned more about meditation, I also met fascinating people who were willing to be open and vulnerable.

After the retreat, I downloaded the app Headspace and tried the free beginner course, which provided 10 minutes of guided meditation for 10 days. It was so doable and so worth it! There are a ton of meditation apps available to explore, but you don’t even need an app. Check out Margi Dehlin’s blog for a meditation exercise you can use during times of suffering.

I don’t meditate every day and I still have a ton to learn, but already my life has been enriched by trying meditation.

Mormon Stories events are worth attending

I’ve just shared the tiniest bit of the enormous value of attending a Mormon Stories event. The workshop in Los Angeles with John was fabulous; the retreat in St. George (with Natasha Helfer Parker, Lindsay Hansen Park, Roy Jeffs, and Sam Young) was mind-blowing!

It’s so worth going to a workshop or a retreat. Or both!

Have the courage to go and you will meet courageous people.

Who knows? I just might go to another retreat and I hope to see you there!

What Does a Mormon Faith Crisis Feel Like?2.8K Total Shares